Iberian pigs pasture in an ecological paradise beneath large oak trees in the mild Mediterranean climate four different areas of South Eastern Spain: Extremadura, Guijuelo in Salamanca, Jabugo in Huelva and Los Pedroches in Cordoba. The pigs lead a healthy live style, getting plenty of exercise and choosing the sweetest acorns to eat from 40 oaks (5 acres) each pig. This breed of pigs is known as pata-negra because of the distinctive black color of their hooves.

Producing the cured ham of the Iberian pig, known as Jamón Ibérico or Jamón Pata Negra, is a lengthy and complex artisanal process can take up to 4 years. 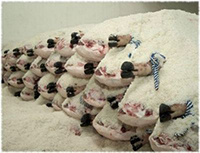 First, the ham is cured according to a traditional technique, buried between layers of salt for a period of up to one month. This process conserves the meat and enhances taste without using any artificial preservatives.

Second, the ham is stored in cold storage for about 90 days at a special temperature so that the salt distributes equally through all of the parts of the ham.

Finally, when the ham has reached maturity, the drying or “bodega” stage starts. This is when we hang the jamón from the ceiling of the bodega in order to dry it according to a centuries old tradition. The jamón must rest in this hanging fashion for up to 36 months, depending on the variety to be produced, so that the fat is distributed between the muscle fibers to obtain its unique texture, taste and aroma.

Three different qualities of jamón are produced depending on the lifestyle of the pigs and the length of the production process.
The pig’s diet is the key to ensure the quality of the Jamón Ibérico.

De cebo. This jamón is produced using the meat of pigs that live in intensive livestock farms, eating selected legumes and cereals.

De cebo de campo. This jamón is produced using the meat of pigs that live in semi-liberty in farms and open pastures, eating selected legumes and cereals for most of their lives, and then are fed acorns during the fattening stage.

De Bellota. This jamón is produced from the meat of the happiest and healthiest pig! These pigs roam freely in oak forests during their whole lives, getting plenty of exercise, which ensures the perfect fat-to-meat ratio. During the acorn season in the fall, the pigs eat the sweetest acorns (bellota) that fall to the forest floor. This is the highest quality Iberian ham product by far.

For your enjoyment, we provide top-notch Jamón Ibérico de Bellota!